Posted on November 8, 2015 by Agriculturetodayblog

In the past I have tried to keep my posts mostly focused on agriculture. A lot of the people who pop in to visit my page are involved in the industry and probably aren’t interested in family vacation photos and the like. This post is going to be a bit of an exception but hang in through the whole thing, I’ll get to the farming stuff eventually. I promise!

I recently returned from a trip to Churchill, MB with the Wadena Composite School. The principal, Darin Faubert, does a fabulous job of organizing trips around Canada for the students to learn about this wonderful country we live in. My son Brayden was so excited about this one that I decided I better sign us up to go even though I knew it might be nip and tuck to finish harvest in time. The children were excited to see the polar bears and learn about the history of this northern community. Some of us farming parents were just as excited to see The Hudson Bay Port! But more on that later…….

The history of Churchill goes back much farther than the history of Canada itself, there has been evidence found placing humans there 4000 years ago. It is believed that this area was a seasonal hunting ground. In the early 17th century Henry Hudson was the first European to explore the bay, followed by the Danish explorer Jens Munck who was looking for a northern passage to the Orient. His 2 ships, each with a large crew, were forced to winter in Churchill when the bay froze over and only Munck and 2 crew members were alive to sail back home in the spring. The Hudson’s Bay Co. is the oldest commercial corporation in the world and its headquarters were set up at York Factory about 250 km southeast of Churchill. In 1717, a fort was established in the bay by the Hudson’s Bay Company who named it Fort Churchill. Fort Prince of Whales followed in 1731 on the other side of the Churchill River. The fort took 40 years to build and was overtaken by the French shortly after completion. The Hudson’s Bay Co. reclaimed fort Prince of Whales the next year, the climate was harsh and it was hard for any country to maintain troops this far North. In 1931 the building of the port began and the town of Churchill grew. In 1942 Fort Churchill the base was established by the United States Air Force near the original Fort Churchill, about 10 km outside of the existing town. This was part of a proposed overseas route to support allied forces in Europe. It became a training and experimental center after World War II and closed in 1980 (after assumedly the military decided the climate was to cold and no one was going to bother attacking our continent from the North anyway). The town is now known for its wildlife and is coined “The Polar Bear Capital of the World”.  Because the ice forms on the bay before anywhere else on the coast the bears congregate here waiting to get out on the sea ice to hunt seals. For about 6 weeks a year polar bears are the highlight of the tourism industry to Churchill. Because there are not roads this far North we had the pleasure of riding the train 36 hours to get to here from Canora, Saskatchewan. The kids enjoyed the time spent with their friends and after weeks of feeding our harvest crew, I enjoyed eating in the dining car! 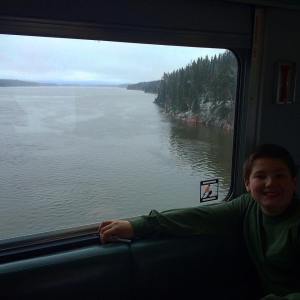 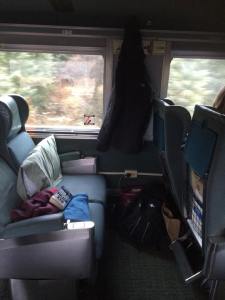 Enjoying some great Canadian scenery, and relaxing in my little train ‘apartment’ 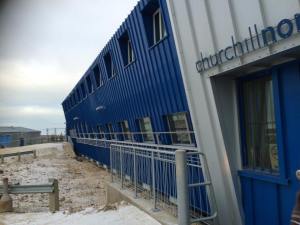 Churchill Northern Studies Research Center; Our home for the next few days. The building is built on an angle so the bears can’t climb up it, with bars over the windows to prevent the bears from breaking in. 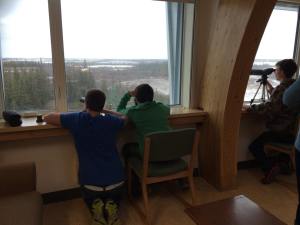 It didn’t take long to get out the spotting scopes once we arrived!  Bears out our windows.

Our first bear sighting while on our way into town just outside where we were staying at the CNSC, a mother and a cub spotted by ‘eagle eyes’ Keenan Sowa. 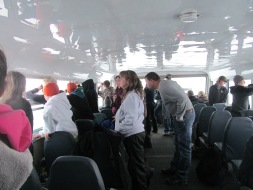 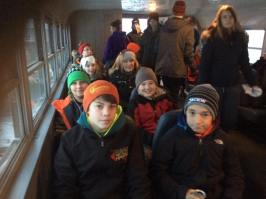 Inside the tundra buggy.  We traveled on naturally made roads created by post-glacial rebound, which is the rise of land masses that were depressed by the huge weight of ice sheets through a process called isostatic depression.  These land masses between all the small lakes make it possible to get close to where the bears tend to gather.  We had a great day and counted 21 sightings in an 8 hour period.

Even the buggy driver had his camera out for this.  It isn’t often you will see a bear catch a seal before the bay is frozen over.

Bray is going to be really mad at me someday that I posted this picture of him hanging out with his Momma.

Bear just came out of the water near here, we are checking out the tracks while on a Nature 1st Tour.  Pretty sure our great tour guide singlehandedly convinced my son to move up here when he is done school. Not much is done without armed guards this time of year, they take safety seriously because they have to. While shopping downtown some of our group had to run into a lounge because there was a bear on the next block. Below we are checking out the original Fort Churchill, and checking out the town.  Because the military tested weapons here in the past there is still live weaponry in places.  You will see these signs all over warning about the dangers. 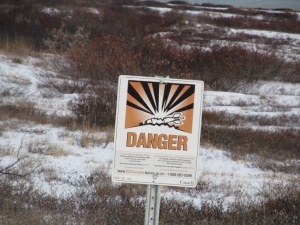 Ok here we go with a little farming stuff (because you know what they say, you can take the girl off the farm but when she writes her blog post about it, she’s going to find a way to talk farming). Another parent and local farmer; Dwight Pomedli, called ahead and set up a tour of the Hudson’s Bay Port. 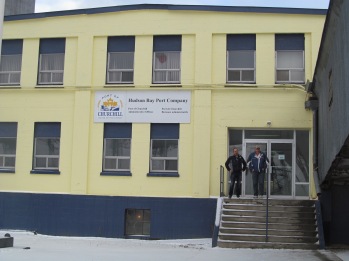 Not accessible by road and iced in for much of the year, the chances to tour the facility where most of the grain goes from our farm are few and far between! The unique location of this port offers opportunities for the export of manufactured goods, mining, forest products, and of course grain – and import of ores, minerals, steel, fertilizer, and petroleum. The port is really only accessible from late July to early Nov and we arrived on Nov 1st about 4 hours after the last ship of the season set sail. Although disappointed that we didn’t get to see the ship being loaded, we were glad to be able to tour the entire facility which we may not have been able to do if everything was in motion. A key piece in the complicated puzzle of getting grain from the very middle of this country to export, Saskatchewan is the Hudson Bay Port’s largest customer with up to 90% of the product shipped coming from our province. After the serious grain shipping backlog the prairie farmers suffered trying to move the 2013 crop, many of us (myself anyway) took a larger interest in the logistics of grain movement in our country.  Omnitrax acquired the rail line from the government 1997 and subsequently there was talk about closing down the rail line and the port (which is also owned by them). This would be detrimental to the town of Churchill because there are no roads into the town (only rail or air) and because of the loss of jobs. This would also have a huge impact on prairie farmers and our inland grain terminals, restricting the ability to move grain in a timely fashion while most likely negatively affecting prices. Although it seems the port and the rail line have remained viable over the last 18 years since Omnitrax took it over, the aging infrastructure and lack of investment into the operating systems of this terminal make me wonder how serious the company is about keeping it open in the future. Much of the building and operations are original to the 1931 design.  This may be something for Saskatchewan farmers to consider going forward.

There are many opportunities for the future of this business.  The route to Europe through here is much shorter than any other American port and in 2007 the port received its first ever import shipment, it was fertilizer purchased by the Farmers of North America from Russia. Hopefully as the global export stage becomes smaller and more accessible for the average business, the Port of Churchill will continue on as an option for North American trade. 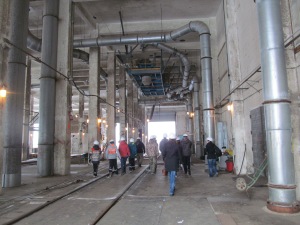 Above is the chalk board of the 236 bin system used for storage.  Blending of the grain when loading the ships is still done by opening multiple bins with a hand crank below and touring where the grain cars are unloaded still using a cable and hook system.

Teacher by day, farmer by night, Mrs. Ziola is taking it all in and yes you guessed it, that is the bin measuring rope on the floor.

All in all it was a very interesting trip.  Thanks for sticking with me to the end, I know it was a long post. Hope you stop in and visit again soon!

Bridging the communication gap between farm and fork!