Got Questions? We Have Answers!

Posted on October 14, 2014 by Agriculturetodayblog

This post is one I have been rolling around in my head for weeks.  It is important for me to write it, and do a good job, because it is the main reason I decided to get involved as an advocate for agriculture and start my own blog.  It is a post that talks about the issue of COMMUNICATION.  This is a weighty subject and I think I might have to do a follow up in the future because I have already edited about 5 times for length!

Our population has been growing at an increasing rate every year.  Years ago those employed in agriculture and the agriculture industry (think; farmers, scientists, companies like Monsanto, Syngenta, Bayer, John Deere, Case IH, etc.) saw what was coming and where agriculture needed to be to meet the needs of a growing global populace.  They put their heads down and worked feverishly at improving the system.  Together they have done a great job; “A Canadian farmer could only feed 10 people a century ago, but can now feed over 120 today.  Farming productivity has jumped by 300 per cent since the 1950s – and at the same time, we’re using fewer resources, less land and newer, better technologies to produce more food.”  http://www.farmfoodcare.org/news/2-farm-food-care/37-dirt-on-farming

What we have all failed miserably at is communicating to the rest of the world what we are doing and why.  In a world where every generation is becoming further and further removed from the farm life, we mistakenly assumed people would understand why these things had to be done, and that changes were being made in a safe and sustainable way.

A world in 1950 where around 2 billion people woke up every morning was vastly different from today where the population is over 7 billion, and 2050 when the population is expected to hit 9.5 billion (requiring an increase in global food production of around 70%) source: UN, Dept. of Economic and Social Affairs, Population Division (2013). World Population Prospects: The 2012 Revision. 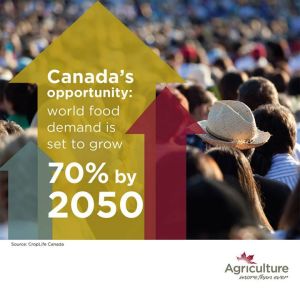 About 21,000 people die every day from starvation or hunger related causes, without the agricultural advances of the last 50 to 60 years that number would be a lot larger.  I have been told, more than once, that agriculture needs to go back to the way it was 50 years ago.  This is clearly a mindset that comes from not understanding our global situation.

Because of the lack of communication between the Ag world and the rest of the population, misinterpretations are found in almost every discussion about our food production.  Over the course of the last few years I have encountered many comments from people that simply do not understand what is happening ‘on the farm’ and have a poor comprehension of farming practices.  It is these conversations that have brought me to the opinion that the farmers need to do a better job at explaining what is going on in our day to day lives!  I have compiled a list of some of the more memorable comments made to me, my farming friends, and others that I interact with on social media.  (My apologies for not giving credit on each comment, I didn’t have sources for each one so decided not to source any – feel free to contact me if you would like credit for a comment that you provided).  I have debunked some of the simpler myths but not all of them in efforts to keep this blog at a reasonable length.  If you have questions about why some of these statements are incorrect read on and I will tell you how to find the answers!

This list is not meant to make fun of or shame anyone.  It is simply meant to point out the large divide between what is actually happening on our farms, and what people THINK is happening.  This raises the issue of what should people do when they have a question about our food production?  Well my friends, this is the reason for my post today!  I am so excited that a great group of people have gotten together for a project called ‘Ask The Farmers’ http://www.askthefarmers.com/ .

The group and website are fairly self-explanatory; a bunch of advocating farmers from all types of farms and other industry people joining together in one place to hopefully answer any and all questions that you can think of!  They have created a kind and helpful environment where no question is trivial or to difficult.  I know some of these people through social media and highly respect what they are doing for the perception of agriculture.  I commend them for their hard work and am looking forward to helping with this project in any way I can.  If you haven’t already liked the page on Facebook or followed it on twitter what are you waiting for?

Email your questions to askthefarmers@hotmail.com

Be sure to visit some of the great farm agvocates involved in this project!